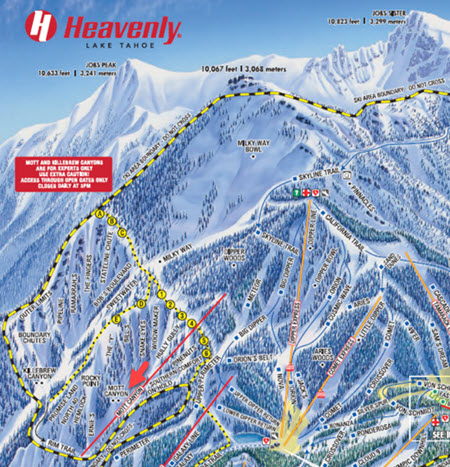 the scene on the Mott Canyon double black diamond trail where they found 36-year-old patroller, Christopher John Nicholson. The critically injured patroller was transported via Care Flight to Carson Valley Medical Center in Gardnerville where he succumbed to his injuries.

END_OF_DOCUMENT_TOKEN_TO_BE_REPLACED

Yellowstone Club ski patroller and avalanche expert, Darren Johnson, triggered an avalanche near Cedar Basin that swept him to his death. Johnson was in a 4-member group doing avalanche research on 19 January in the southwestern Montana area near Big Sky. Having concluded 23 stability tests over 4 hours of research that late morning and early afternoon, Johnson was well aware of the risk of jumping onto what the group had determined was an unstable wind-loaded slope with a “Considerable” rating for avalanche risk, but END_OF_DOCUMENT_TOKEN_TO_BE_REPLACED

According to the Colorado Avalanche Information Center (CAIC), Sutton was in a group of four patrollers from Colorado’s Wolf Creek that were transported via helicopter to Pt. 12,505, which is approximately one mile west of Conejos Peak, and around 16 air miles SE of the Wolf Creek area where they typically END_OF_DOCUMENT_TOKEN_TO_BE_REPLACED

Long-time Santiam Pass ski patroller, Dr. Kinley K. Adams, was killed in a solo ascent of Mount Hood on 22 June 2013. Adams went missing on the mountain at some point after leaving Mount Hood’s Timberline Lodge at around 12:30 am that day.

He had previously made the ascent of Hood a number of times and was expected back in Salem, Oregon, that day by 4 pm, where he lived and worked as a dentist. A search began when he did not return. His body was not discovered until Saturday, 29 June, and his remains were transported down the mountain by rescuers that Sunday evening. END_OF_DOCUMENT_TOKEN_TO_BE_REPLACED

The Occupational Safety & Health Administration (OSHA) has cleared the Aspen Skiing Company (SkiCo) of any wrongdoing in its inquiry into the death of ski patroller, Patsy Hileman.

SkiCo sources said in an Aspen Daily News report that they have no plans to change any policies in response to the incident.

Patsy Hileman, a 26-year veteran of the Aspen Ski Patrol, died in an avalanche on 30 December 2012 in the Ship’s Prow Glade, a permanently closed Snowmass backcountry skiing area. Hileman appears to have been skiing alone and inadvertently triggered a portion of the “crown” from a previous avalanche that pushed her off END_OF_DOCUMENT_TOKEN_TO_BE_REPLACED

A memorial was held on 5 January for Patricia Mae “Patsy” Hileman of Snowmass Village, Colorado. Patsy, a 26-year veteran of the Aspen Ski Patrol, died in an avalanche on 30 December in the Ship’s Prow Glade, a backcountry skiing spot at Aspen’s Snowmass area. The memorial service celebrating her life was held on at the Elk Camp restaurant at Snowmass Mountain.

Hileman appears to have inadvertently triggered a portion of the “crown” from a previous avalanche that pushed her off the edge. She was skiing in a section of the Snowmass backcountry that is not explicitly open to the skiing public due to its inherent dangers. A previous avalanche at that location had been triggered with explosives by the patrol on 27 December 2012, three days before Hileman’s incident. While the avalanche was very small, it appears to have been of sufficient size to sweep Hileman, an expert skier familiar with that area, off the cliff’s edge. END_OF_DOCUMENT_TOKEN_TO_BE_REPLACED

The body of Nick Hall, 33, was recovered from Mount Rainier on 5 July 2012. Hall perished in a 2,600′ fall onto Rainier’s Winthrop Glacier from 13,800′ while rescuing climbers from Emmons Glacier on 21 June. Hall had just placed the 4 injured climbers from Texas into a rescue helicopter for their evacuation, when a gust of wind pushed him over the edge. He was in the process of securing an empty litter to the helicopter prior to departure.

Rangers made it to the lower incident scene that day and attempted recovery then, and again on 28 June, but had to call-off the missions due to Avalanche danger, high winds and unfavorable weather conditions at the 11,000’+ location.

Hall had been a climbing Ranger on Mount Rainier for four years. Six rescue workers from the 214th Air Regiment of Joint Base Lewis McChord used a Chinook helicopter with the assistance of a Hughes 530 from Olimpia’s Northwest Helicopters for the evacuation of Hall to Sunrise. He was then transferred to an ambulance for transport to the Pierce County Medical Examiner’s Office. Preparations had been made following the incident to secure him in an anchored litter for later transport. Avalanche rescue dog, Cirrus, from Chrystal Mountain Ski Patrol was used to locate the body under several feet of recent snow. Cirrus is owned by Crystal patrollers Andrew and Michelle Longstreth. END_OF_DOCUMENT_TOKEN_TO_BE_REPLACED